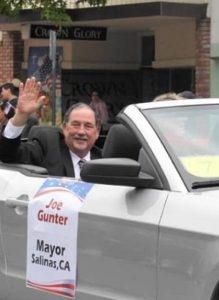 Joe Gunter, Salinas Mayor, Salinas Police detective, former Marine, beloved friend to many and public servant passed away June 29, 2020 in Salinas, California. He was 73. As a Salinas Police detective, Joe Gunter was a face of dogged persistence. He served 32 years in the department, rising through the ranks from patrol to head of investigations before retiring in 2002. Upon retirement, he didn’t retire. He thrust himself into public service to the community he loved – Salinas – serving as Mayor from 2012 until his death in 2020. In January, the county board recognized him for 50 years of public service with a formal resolution describing his life and accomplishments.

He was instrumental in the founding of the parade and our number one supporter every year,” said Tony Virrueta, Veterans Day Parade Co-founder. “It would not be what it is today without his support.” 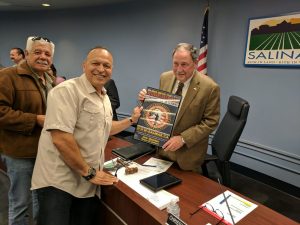 The former Marine was beloved for his approachable, kind and caring words and pride of being a veteran. Upon graduating high school, he joined the Marines and served in Vietnam. He relished the annual Veterans Parade in Salinas – helping organize and taking part. He enjoyed the smiles, the waves and feeling of bringing Salinas together.

“This has been a true patriotic labor of love for our Parade Committee,” said Tony Virrueta, Chairman and co-founder of the Veterans Day Parade along with Phil Orozco. “Our once a year gift is to see all the Veterans and their families beaming with pride as they are rightfully honored for their service and sacrifice. The little American flags waving by all of our spectators throughout Oldtown Salinas is a testament to how much our Community loves their Veterans.”

The Mayor Joe Gunter Memorial Fund for the Veterans Day parade is an endowed fund which will support ongoing operations of the annual Monterey County Veterans Day Parade in Salinas.

Donations to the Mayor Joe Gunter Memorial Fund for the Veterans Day Parade of the Community Foundation for Monterey County (CFMC) are tax deductible. The CFMC is a 501(c)3 nonprofit organization,Tax ID #94-1615897.

The Veterans Day Parade was co-founded by Tony Virrueta because he and fellow Veterans and their families wanted an event to honor those who served. They started small and in ten short years have grown to one of the largest Veterans Day Parades in the State. They are a nonprofit, volunteer-driven organization that raises funds all year long so that participants can join at no cost. On November 11, 2020 they will celebrate a milestone of the parade’s 10th Anniversary. The 10th Annual Parade will be dedicated to Mayor Gunter. All funds granted and donated go directly into parade costs each year. They pay for City fees, insurance and other incurred costs to host the  parade.