Panettas Honored at 2018 Celebration of Philanthropy

Secretary Leon Panetta and Sylvia Panetta have made an incredible impact on the Central Coast. Their accomplishments were celebrated Wednesday, October 24, 2018 by the Community Foundation for Monterey County (CFMC). 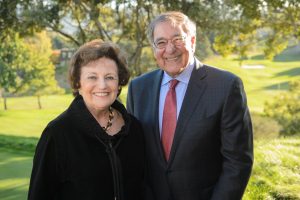 They received the CFMC’s 2018 Distinguished Trustee Award at the annual Celebration of Philanthropy at Corral de Tierra Country Club, which was attended by more than 300 friends and supporters. The award honors those who have demonstrated philanthropic leadership in Monterey County. Though they been active on the national and international stage, the Panettas never lost their sense of place and commitment to Monterey County.

The Panettas have contributed immeasurably to the betterment of Monterey County. They are champions of civic engagement, and outstanding supporters of nonprofits advancing literacy, healthcare, public education and youth development,” noted Ken Petersen, CFMC  Board Chair. “Their decades of leadership have inspired and encouraged others and their commitment to excellence has served as a model for other organizations.”

We were deeply honored to receive the Distinguished Trustee Award because the work of the Community Foundation and the Panetta Institute is dedicated to the same goal – making the American Dream real for all people.” – Leon and Sylvia Panetta

Secretary Panetta and Sylvia co-founded The Panetta Institute for Public Policy in 1997, a nonpartisan, nonprofit study center to inspire men and women to lives of public service. The institute is committed to growing leadership and creating opportunities for education and debate.

One of Leon Panetta’s proudest accomplishments is the establishment of the Monterey Bay National Marine Sanctuary. Through the Panetta Institute, Sylvia Panetta was key in launching the Monterey County Reads Consortium in 1997. Since then, they have placed more than 3,500 volunteers with over 18,000 students in 10 school districts to fulfill its goal of using literacy to improve the lives of young people by helping them become life-long readers.

In our lifetime there are very few people that you come in contact with that have had such a significant impact on our community, our country and our world.”  – Ted Balestreri, Panetta Institute for Public Policy Board Member

Long-time friend Mary Orradre, noted, “Sylvia and Leon are a gift to Monterey County, because of their vision and tireless efforts. The Panetta Lecture Series has given countless people the opportunity to hear the movers and shakers of our country. The Internship program provides the best and the brightest college student leaders the opportunity to see first-hand how Washington, D.C. works. Monterey Reads is a cornerstone of Monterey County’s Office of Education reading program.”

Sylvia and Leon give new meaning to the phrase: ‘Giving Back.’ ” – Mary Orradre

The CFMCs Celebration of Philanthropy thanks those who support and partner with the CFMC to invest in healthy, safe, vibrant communities. As award recipients, the Panettas designated a $10,000 grant from the CFMC to the Panetta Institute for Public Policy.

About Leon Panetta Secretary Leon Panetta has had a 50-year career in public service at the highest levels of government: He began his public service career in 1964 as a First Lieutenant in the U.S. Army, receiving the Army Commendation Medal, and then served as a legislative assistant to U.S. Senator Tom Kuchel. In 1969 he was appointed Director of the Office for Civil Rights at the Department of Health, Education and Welfare. Elected to Congress in 1976, Secretary Panetta represented the California Central Coast for 16 years. While serving in Congress, one his proudest accomplishments is the established the Monterey Bay National Marine Sanctuary. In 1993, he was sworn in as Director of the U.S. Office of Management and Budget for the Clinton administration and was later appointed White House Chief of Staff. As Director of the CIA he successfully supervised the operation that brought Osama bin Laden to justice. As the 23rd Secretary of Defense, he established a new defense strategy and strengthened U.S. alliances.

About Sylvia Panetta Sylvia Panetta, a San Francisco native, attended Dominican University in San Rafael and received her nursing degree from St. Joseph’s College. From 1977 to 1993 she directed five Congressional district offices in the 16th Congressional District while her husband, Leon Panetta, served in the U.S. House of Representatives. She also managed each of his re-election campaigns. In 1995 Mrs. Panetta was appointed Deputy Director for Staff and Finance at the President’s Crime Prevention Council in Washington, D.C. When Leon Panetta returned to government service in 2009, Mrs. Panetta assumed the roles of Chair of the Board of Directors and CEO of the Panetta Institute. Her community involvement includes board membership in several nonprofit organizations, including the Community Foundation for Monterey County. She was recognized as Woman of the Year for the California 15th Senate District, presented the Unto the Light Award from Congregation Beth Israel and the Economic Vitality Award for Education from the Monterey County Business Council. She was also named 2011 Citizen of the Year by the Monterey Peninsula Chamber of Commerce.

About the Community Foundation for Monterey County
The CFMC granted $16.7 million in 2017 to hundreds of nonprofits. The mission of the CFMC is to inspire philanthropy and be a catalyst for strengthening communities throughout Monterey County. For more information, please call (831) 375-9712, visit www.cfmco.org, or stay connected on Facebook at www.facebook.com/cfmco.